The Presence of Absence by Luchezar Boyadjiev

“Christo for Beginners” by Luchezar Boyadjiev is a project about what’s private and shared in both the physical space and the imagination. The artist engages with the public space and that involves the urban, the media, and the virtual environment. Luchezar Boyadjiev is activating them with artworks, visions, exhibition displays, actions and lectures while involving the collaboration of both his fellow citizens and colleagues. Luchezar Boyadjiev is a known expert on the projects, the practices and the methodologies developed and used by Christo and Jeanne-Claude. However, this is the first time he is implementing such a project as an artist, rather than as an art critic, a theoretician, a lecturer or a historian of art. “Christo for Beginners” is the pilot project of the Sarieva / Gallery and the Open Arts Foundation within the Sarieva Open Arts program.

The Presence of Absence is a notion that Christo and Jeanne-Claude used often but did not elaborate upon. However, the practical and theoretical implications of this notion are incredible when seen against the backdrop of their work. Especially concerning The Gates (1979-2005) for Central Park in New York, USA.
The Presence of Absence is about the cycle of ‘appearance/disappearance’ of the actual work, in fact The Work – the realization in situ of a utopian idea. The appearance of the idea is at the beginning, almost like a birth of a child (Jeanne-Claude often referred to the projects as to “children”, whose cost of raising will be as great as needed). The disappearance of the realized utopia (in the form of a massively popular, beautiful, hard to materialize, costly, and magical art work in public space) was at the end of this cycle. That cycle has various implications – from visual, financial and ecological, to material, aesthetical, engineering, and human and so on. 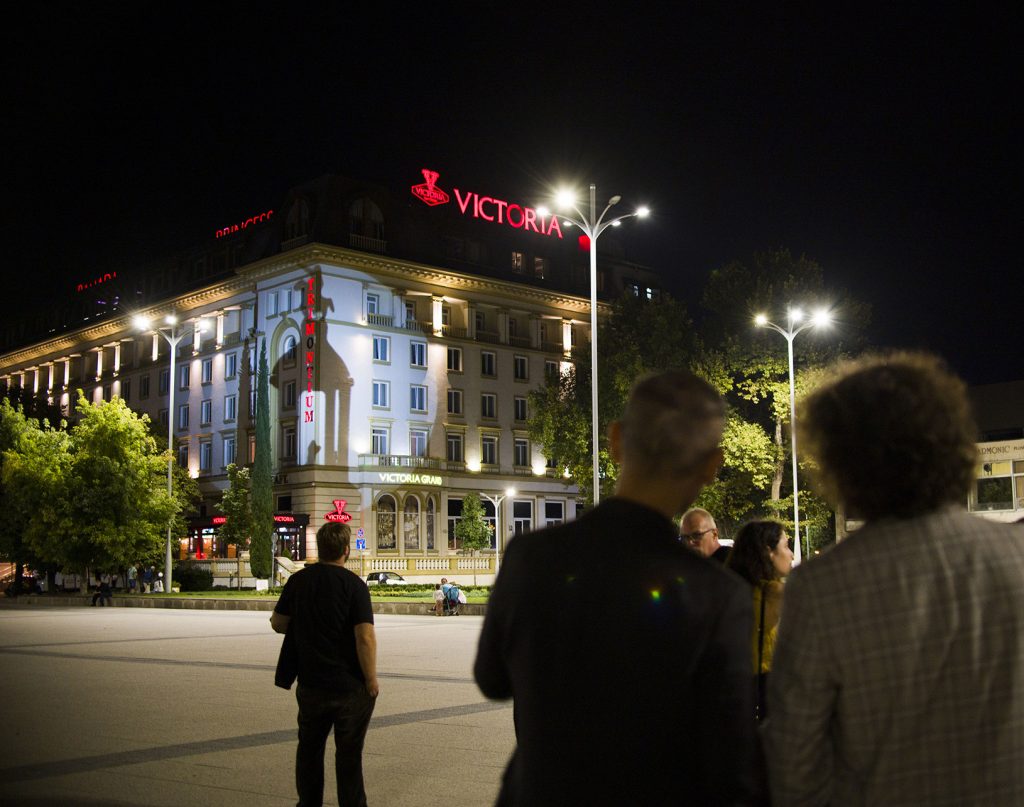 Ultimately, what remains is the memory of an event and the elaborate record of a lengthy and passionate process of drawing/projecting for the future, of negotiations, trial and error, dedication and endless belief in art. The work is no longer with us, but the memory of its temporary existence/life remains.

That is the presence of something, which is absent.
Well, isn’t it so with life and the living who are at first physically present and then absent? Always guaranteed to remain in the memories of their loved ones? What is it that remains but the memory of a person (be that as it may a lay woman/man or a hero, she or he) and a few items of paraphernalia? Isn’t this all we need to honor and cherish the past – a kind of a shadow, rather than an object? A shadow is for everyone. An object, a monument or a museum as an institution of memory might be possessed, privatized and instrumentalized for a cause, not necessarily in tune with the past.
Isn’t a reminder, a shadow, a memory all we need, in fact? The ecology of history will benefit from a multitude of interpretations/locations/stories of the shadow/memory.
In other words – from The Presence of Absence…

Note: Right after 9/11 and the attack on the Twin Towers in New York City the world changed and took a very dangerous form. We are living through it even today. Soon after 9/11 Michael Bloomberg, a businessman and a collector-friend of Christo and Jeanne-Claude, was sworn-in as the Mayor of the City of New York. One of the first things he did was to re-ignite the process for the realization of The Gates for Central Park in New York City. He wanted to give a new perspective to the life of the city; he wanted to re-cast a horrible shadow without dishonoring it.
He had logistical pre-conditions though – no money from the city but all proceeds from souvenirs (for the first time the artists agreed to produce and sell all those T-shirts, postcards, booklets and what not) will go to the Central Park Conservancy (the body taking care of the Park); winter instead of summer (a brilliant demand which changed the color of the fabric – saffron instead of gold); no damage to the walkways in the park (which changed the proportions of the gates, the bases, etc.) and so on.
The artists proved to be adaptable and the “shadow” of The Gates is still lingering on in NYC as a kind of “monument in action”, which is what the goal of this project of ours is all about.

The project is realized with the financial support of the National Culture Fund.

> Presentation and moderated conversation with the artist and experts

> Presentation of the project and archive by Luchezar Boyadjiev and Vesselina Sarieva
November 30th, 2022, location and time TBA, Sofia