Light and Dust by Dimitar Genchev 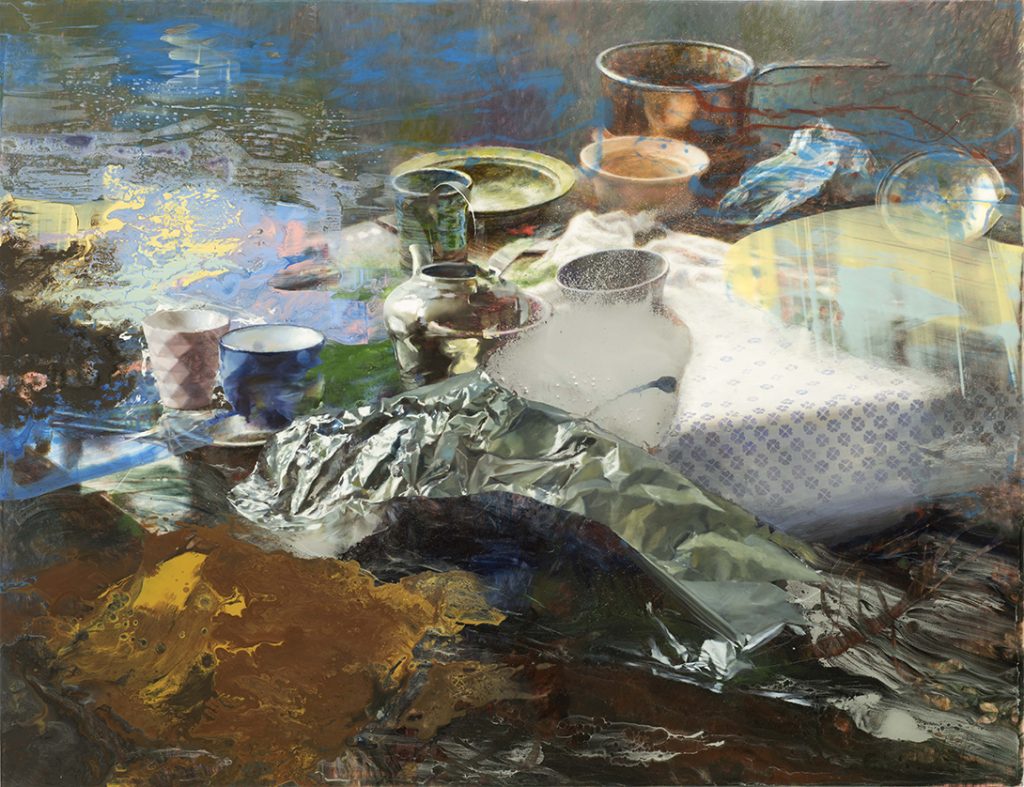 Sarieva/Hub is pleased to present the solo exhibition “Light and Dust” by artist Dimitar Genchev.
“Light and Dust” exhibits new works by Genchev, who remains faithful to his classical manner without being limited by the imagery and visual codes of classical painting. Typical of the artist, the canvases turn into explosions of colour, saturated with vitality, but equally gentle. Industrial elements break through the backgrounds and coalesce into heavily saturated spots placed on the verge between existence and non-existence. Forms disappear and reappear, creating a subtle sense of immateriality and ethereality that contrasts with the rough nature of the objects themselves. This opposition is complemented by the combination of hyper-realism with abstraction – the destruction of the image to a blur and its re-emergence to materiality in an alternative artistic reality.
Genchev says that he is not interested in creating a still life, an industrial landscape or a figurative composition, but above all a narrative that carries his alternative view of the world. The artist paints abandoned places and ordinary objects in which he finds something beautiful beyond everyday life. The golden light and exquisite drawing reinvent and transform the forms into ethereal symphonies, at the same time vibrating with energy and color, as if bursting onto the canvas. The works border on multiple oppositions, yet achieve a harmonious essence, building an alternative visual reality in which all contrasts complement each other.
Dimitar Genchev (b.1985 in Bulgaria) lives and works in Plovdiv, Bulgaria. He received his education from the National Academy of Art, Sofia, HKU University of the Arts in Utrecht, and participated in the residency programme at Rijksakademie, Amsterdam. His works have been exhibited in Museum De Domijnen Hedendaagse Kunst, Sittard, the Netherlands, Sofia City Art Gallery, the Royal Palace in Amsterdam, Kaskadenkondensator, LISTE international contemporary art fair in Basel and Gerhard Hofland gallery in Amsterdam, among many other spaces. Over the past five years Genchev has received awards and scholarships from the Mondriaan Fund foundation, awards for painting: the Buning Brongers Award in the Netherlands, the national competition of Allianz Bulgaria for painting and sculpture for young Bulgarian artists, and the Gaudenz B. Ruf Award. In 2016, Genchev’s paintings were selected by curator Noor Mertens for participation in the Perspectives and Concepts exhibition, part of Art Rotterdam. His works were exhibited in the exhibitions Listen to Us – Artistic Intelligence – works from the Deutsche Telecom collection, BACKGROUND: Young Artists from Plovdiv, organised by Sariev Gallery, and Object Love, displayed at Morsbroch Museum in Leverkusen, Germany.